This is the third post of seven about our hectic journey through India from 26 October to 6 November. Our purpose was to meet students supported in higher education by the Children of Sikkim and the Dutch Trust, as well as children sponsored at school in Kalimpong and Sikkim.

Another 4 am start to get to Bangalore Airport was followed by a connection so short at Delhi that we were bussed directly from one plane to the other. At Bagdogra we were met by Rinchen Lepcha, who owns a tourist jeep and was contracted for us by Sangdup Lepcha, who is the “local Guardian” for the children at Dr Graham’s Homes and lives in the Dzongu area of North Sikkim. Despite the same second name they are not near relatives –  Lepcha is a tribal name in Sikkim, the other common ones being Sherpa and Bhutia. We also have Gurung, Rai and Limboo amongst our sponsored children and students.

Bagdogra is quite hot even in October, but this changes quickly after crossing the Siliguri plain to enter Kalimpong District where the foothills of the Himalaya start. By the time we reached Gangtok at around 7 in the evening, we were at over 1500m (this is higher than Ben Nevis!) and the temperature had dropped to 10 degC. Gangtok is best described as precipitous – parallel streets arranged like a staircase either side of MG Marg which is the main pedestrian area, where that evening we met Loden and his wife Nimkit.  Loden set up the school Mayal Lyang Academy in Passingdang, in the Dzongu district of North Sikkim, which the trusts have also supported. The next day we travelled to Passingdang. The plan was to go via Mangan, where we would pick up a Restricted Area permit which is needed to visit Dzongu. However the road to Mangan was blocked because Public Works were repairing landslide damage to the only road, so we slipped into Dzongu by another route. Our permits were obtained in absentia by sending documents from a road side cafe to a contact in Mangan by WhatsApp. The documents were then brought to Passingdang the following day – showing how it is that everyday use of Social Media flourishes where ordinary communications are dire!  Road travel is difficult pretty well everywhere in Sikkim for two reasons: first, travelling 30 km as the crow flies can mean a road more than twice that length, which drops 1000m and then climbs back up; secondly the rainy season wreaks havoc because of landslides. These are cleared away as they happen, but then the road is left as earth and rocks, quickly degenerates into potholes, and it may be months or years before it is resurfaced. Thus in our case, it took four and a half hours to travel what is only 25 km as the crow flies from Gangtok to Passingdang.

Our reason for visiting Mayal Lyang was to meet Miksim and her relatives. Miksim is now at the end of year 10, and we felt that she should attend Dr Graham’s Homes in Kalimpong for Year 11 and 12 (the equivalent of sixth form in UK), so that she has the best chance of going to university. Miksim is very bright, and good at science, especially biology. Her English is excellent. Maybe she will become a doctor? Her parents are dead so we met two of her solder sisters, who were both extremely supportive.  By the end of our trip we had arranged for her to attend a refresher college in Gangtok from December through to February, in advance of taking her Year 10 exams in March. We also obtained entry forms when we reached Dr Graham’s and sent them to Gangtok with Rinchen.

Overnight we stayed at Sangdup’s Homestay, a traditional Lepcha home, built out of wood, up at about 4000m – except you can book a stay on Airbnb and Booking.com! He trades as Lingthem Lyang Homestay. It has good views of Kanchenjunga. For us it was a bit cloudy but the website  has some great views.

According to Wikipedia, Kangchenjunga is the third highest mountain in the world, and the second highest of the Himalaya. It is called Five Treasures of Snow after its five high peaks, and has always been worshipped by the people of Darjeeling and Sikkim. Kangchenjunga was first climbed on 25 May 1955 by Joe Brown and George Band, who were part of a British expedition. They stopped short of the summit in accordance with the promise given to the Chogyal that the top of the mountain would remain inviolate. Every climber or climbing group that has reached the summit has followed this tradition.

Next morning we visited the school again, then travelled back to Gangtok. 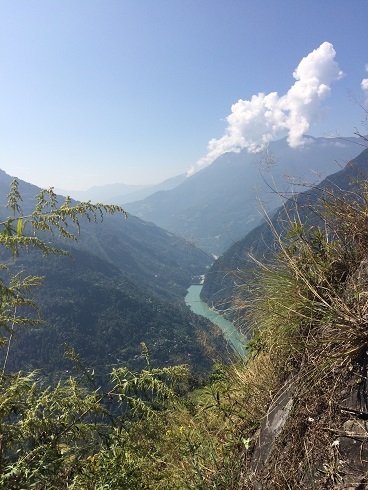 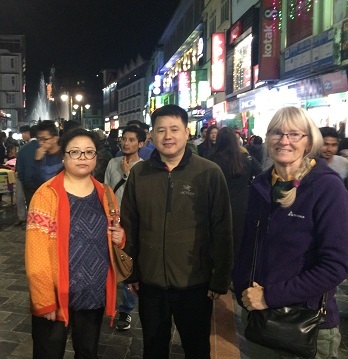 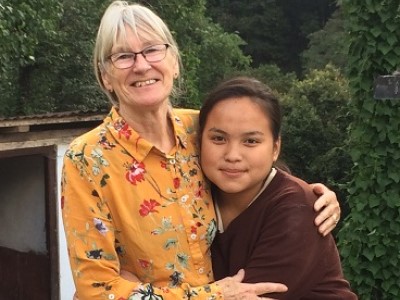