This is the last of seven posts about our hectic journey around India from the 26 October to the 6 November, to meet students, sponsored children and institutions.

Our final stop was Kolkata. But first we had to get there! Rinschen was very nervous about traffic around Siliguri, because recently some clients of his missed a flight at Bagdogra because of hours of traffic delay. In addition, Jet Airways said we have to allow 2 hrs for security. So we left at 5 am for a midday flight; somebodies’ law then dictated there should be no serious traffic so we arrived at 8:30, where we said goodbye to Rinshen who had provided superb service and been a good travelling companion. Despite the warnings there were no serious check-in delays, so we were able to have a nice breakfast.  Then the trouble started – our flight was delayed several times and we finally left after 4 pm, having been nearly 8 hours at the airport.

Next day we had the morning free, so visited the Belur Math, a religious mission on the west bank of the Hooley River. The  temple has architecture dedicated to all the main religions. However no photography allowed!  Then at lunchtime we met Rha Tshering and Kinzangkit with her friend KC. Nobody wanted to travel far so we found a local mall near the hotel in Salt Lake City, which offered everything from pizza to Thai chicken through different outlets. 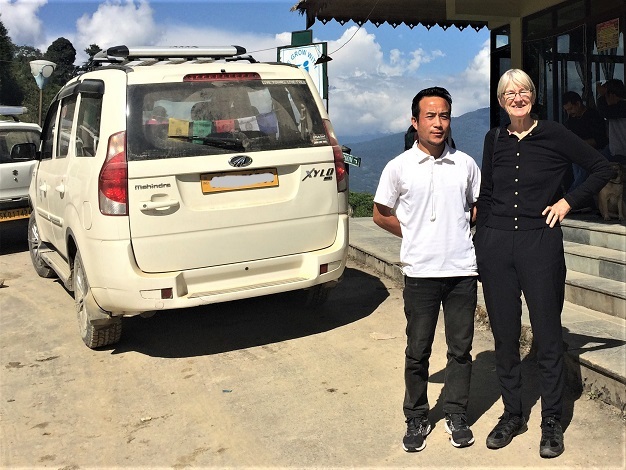 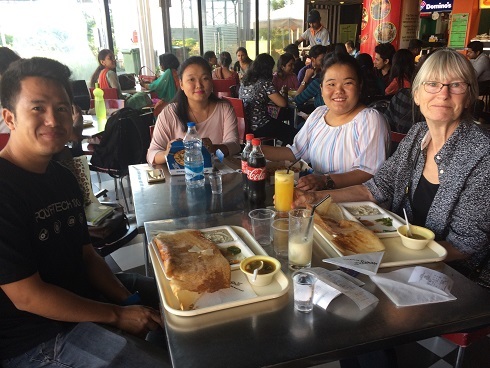 Magi first met both Rha and Kinzang in 2004 – 13 years ago. Now they are at college, although not the same one. Kinzangkit is reading political science honours and is in her second year. Rha is in his last year of a B.Com in accounting and finance . Next year he plans to do his masters (M.Com) and will then sit the civil service exam. In the winter holidays he is hoping to do an internship in Kolkata with his old friend Nedup, see our earlier post from Gangtok. We had brought some old photos so there was indeed some reminiscing, but we also talked about prospects for the future, which seem very positive. Rha told us about the 10k run he was planning in support of education.  When she was 8 years old Kinzang wanted to be a teacher, and still thinks that may be an option.  Kinsang and KC were very sweet and had bought us some gifts, which was quite unexpected. They had also made and signed a card for us. Exams were looming so we really appreciated the time they took out to see us.

We parted early evening so that we could get ready for our morning flight the next day from Kolkata to Delhi and then a change of plane for the last leg to London. From Kolkata to home was to take us 21 hours but we were prepared for that, and it felt like a small price for the opportunity to meet all these children and young adults from Sikkim who are supported through the Dutch and UK trusts. We must also thank the individuals and companies who give generously so as to make possible an education which would otherwise be denied.